Note: This is the first of my books read for the 2018 Back to the Classics Challenge for the author that’s new to me category.

I live down the street from one of my college English professors. When I moved in, six years after I’d graduated from college mind you, she popped an old graded essay of mine in my mailbox. She’d had it all that time. I got an A, by the way.

Anywho, last summer Ros saw me reading on the porch and stopped by to talk books. She told me some of the story of Evelina: Or the History of a Young Lady’s Entrance into the World by Frances (Fanny) Burney, which she had never read. She was delighted by it and I must say, I agree, despite the somewhat irritating greenness of the protagonist. 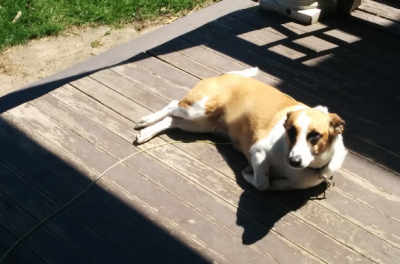 Someone else that likes to hang out on the porch

Evelina is a sheltered young woman (as were most young women of her era and station) who, as the full title says, makes an entry, somewhat accidentally, into 18-century British society.

Here’s a great plot summary on wikipedia. I’m not going to summarize the plot because, honestly, the ins and outs of the characters and locations may lose or bore anyone without an assured interest in the novel. Also, if you’ve read widely, you know that classics of this era (the book was first published in 1778) contain many complicated details and subtleties possibly only interesting to those who’ve read them.

A few thoughts I had while reading Evelina

The letters: This is the epistolary novel at its finest. The book consists mostly of letters from Evelina to Reverend Arthur Villars, her guardian and the man who raised her, from whom she is parted for most of the book.

Evelina Anville grows up: We spend a lot of time with Evelina as she learns to navigate the society into which she is thrust. This character development is both entertaining and gratifying as she transforms from a shy, nearly speechless (to anyone outside the Mirvan women), nearly motionless (refusing dances at a ball) girl with no real will of her own to a woman who competently stands up to her harassers, like Sir Clement (eventually) and the Branghtons, Evelina’s London relations, along with Madame Duval, who are a family of absolute boors.

“Unused to the situations in which I find myself, and embarrassed by the slightest difficulties, I seldom, till too late, discover how I ought to act.”

Evelina is irritating: I must admit, though, the process was somewhat frustrating. There’s a point at which Evelina writes to Orville to thank him for use of his carriage which her awful Branghton cousin requested in her name without her consent. He writes back assuring her that it wasn’t a big deal and, not only that, he’s delighted that she’s begun a correspondence with him and eagerly awaits her reply. Evelina is telling all this to her friend, Maria Mirvan, and spends the rest of the letter castigating herself for allowing him to think her so forward. It’s obnoxious. (The letter from Orville, by the way, turns out to be a trick by Sir Clement. We find out in the end that he’d intercepted her original letter and concocted a response, putting Orville’s name to it.)

The Branghtons and Madame Duval: Ok, it was kind of fun to watch them screw around and make a mess of their own interactions in a society which they are rich enough but too boorish to navigate properly. Also, the exchanges between Madame Duval and Captain Mirvan, a complete ass, are kind of hilarious as the captain spends most of his interactions inciting offense. It’s enjoyable to watch until it becomes simply tiresome.

Mrs. Selwyn: I felt the novel was seriously lacking in wit until this lady showed up in the last third or so. (Any wit to be found is mostly in the social commentary Burney is making along the way, I suppose.) Here she is throwing shade at two noblemen who’ve made a ridiculous bet over a carriage race:

“These enterprises,” said Mrs. Selwyn, “are very proper for men of rank, since ’tis a million to one but both parties will be incapacitated for any better employment.”

Sentimentality: This is a sentimental novel written by a master of the genre. It went hand-in-hand with the gothic novel of this era, both of which were considered popular fiction. Reading it now, however, the big emotions come off as melodramatic.

Here’s Sir John Belmont after reading a letter from his long-deceased wife:

“Oh that thou could’st witness the agony of my soul!- Ten thousand daggers could not have wounded me like this letter!”

There’s a lot of this. And to a modern reader, it’s a bit grating. But that’s the genre for ya’.

I’m sure I’m missing some important things about the fates of women in the era. Indeed, the book deals entirely with the fates of its female characters. But I’m sure someone other than me has made a better study of that than I could, so I’m going to nope out on that topic.

7 thoughts on “Evelina by Fanny Burney”