A while ago I realized I was slowly buying and re-reading all the books I loved as a teenager and young adult.

When I remember a book, I buy it and am slowly re-stocking my library with books I loved during those formative years.

Last night I finished Object of My Affection by Stephen McCauley. I enjoyed it. I had to laugh at Teenage Shannon though. Why this book in particular? What drew me to it in the first place? Why did I read it five or so times at the age of 16? How odd and endearing.

The story is about narrator George Mullen, who is gay and lives in Brooklyn with his closest friend, Nina. When Nina becomes pregnant and decides to keep and raise the baby, she asks George to raise the baby with her.

The narrative becomes a peculiar will-they-won’t-they, but not between two lovers, as we’re generally used to. Instead, we follow the friendship between two people who are wholly devoted to one another, but must navigate a huge change ushered in by circumstance.

I love the character of George. He’s just so relatable. He has fears about being underemployed, for one thing. He’s a kindergarten teacher at a private school in Manhattan and he gets criticized for this even though he’s clearly good at his job.

McCauley excels at writing dialogue and I particularly enjoyed George’s conversations with his little student Doran Dunne, whose parents are battling through a divorce and constantly fighting over him. At one point, George loses his temper with Doran, then apologizes (Daniel and Theodora are Doran’s parents):

I also enjoyed the tight focus on the main characters. There’s George and Nina, of course, but also Nina’s boyfriend Howard and George’s coworker, Melissa.

Howard is a wonderful character. He’s a big personality, a take-charge legal aid attorney, who is deeply in love with Nina and has hilarious nicknames for her “She’s a Dumpling!” he declares to George at one point, crying on the couch after Nina begins to push him away.

All in all, I wonder if it’s the unique characters and Brooklyn setting that captured the attention of Teenage Shannon. I’m going with that.

I’m leaving out whole parts/themes of the book in this review, like George’s love life, but maybe you’ll want to discover those for yourself. I recommend it and am glad I re-read it. Good find, Teenage Shannon.

Guys! I have a little reading project going and I didn’t realize it until now. I’ve been re-reading books from my teenage/college years kind of intentionally but not on a schedule. Spontaneously, I’ll remember a book I loved during those years and then order it so I have a copy and re-read it just to see what 39-year-old Shannon thinks.

I didn’t recognize it as a pattern until today. Perhaps my subconscious, knowing me quite well, has kept this pattern from being noticed by my conscious mind because she knooows it would just turn into a big fat PROJECT with a spreadsheet and thus end in disappointment when I inevitably didn’t finish it.

But…isn’t that fun? I think I’ll make a category for it so one can sort through all the posts that are part of the project. And I’ll go back and re-categorize books I’ve purposefully re-read and blogged about so they all show up.

Right now, I’m re-reading Object of My Affection by Stephen McCauley, which teenage Shannon read about five times, and which became a movie starring Jennifer Aniston and Paul Rudd.

Here’s a small stack of books I’ve bought in the past year or so (peep the copy of Follow That Boy – don’t judge me, it was the early 90s! :D).

Next, I’m planning on acquiring some of the books we read in my college Feminist Memoir class. I remember loving those books and that whole class was an eye-opener for a cis, white, Midwestern teenager.

So, do you re-read books from your past to see if present you still feels the same way (good or bad) about them? Tell me!

Sometimes you just need to read something you agree with. Something squarely in your wheelhouse. Over the weekend, I felt due for a nice, salty rant about something, anything, that I could get behind. So I turned to The Kids Will Be Fine: Guilt-Free Motherhood for Thoroughly Modern Women by Daisy Waugh. Daisy delivered exactly what I needed. I knew she would because I’ve read this book before (in 2014, says Goodreads). But I remember liking it so much that I felt it was worth a re-read.

I have felt kind of salty myself lately about other people’s children. In general and in theory, I really like children. Children are the future, per Whitney Houston. They are beautiful and special and fun for many different reasons, including that life itself is precious and children have only just started the journey, free of the fetters of societal expectations for the moment.

But as I’ve gotten older and more experienced as a parent and a human being, I’ve begun to see other people’s faults played out in their children. Meaning, I often run into children who are spoiled and coddled and whose every action and conversation is prodded and guarded and narrated by their doting (insanely overly attentive) parents.

Our own kid, who graduated over the weekend, with doting, proud, but not insanely overly attentive parents.

Is it the children’s fault? Certainly not. And, probably, most but the criminal parents among us are trying our best. There’s no handbook, as we all know, for the right way to raise children.

But there is common sense. And lest you think this was a rant of my own and not at all a book review, I will tell you that Daisy Waugh’s book lists the various aspects of parenting where modern parents tend to fail in applying common sense.

Rather than chapters, Waugh lists sections and topics, beginning with Part 1: Pregnancy and Birth and Ending with Part 5: Charm School.

Each section contains related topics, such as Baby on Board, a rant on those “Baby on Board” signs everyone puts in their cars; Babies at Night (“Can be a nuisance.”); and Other People’s Children (“Are likely to be fractionally less interesting and more irritating to us than our own…”). Accurate.

I just really enjoyed reading those passages on the behavior of other people’s children because they, specifically, have been annoying me lately (not all my friends’ children, mind you. Mostly strangers’.)

In addition, I loved what Waugh has to say about the helpful approach known as unparenting:

By unparenting, I mean that we avoid making motherhood any more wearisome, costly, or complicated than it needs to be. It means banishing pointless after-school activities that entail chauffeuring; eliminating “playdates” that require organizing more than a couple of days in advance; no more costume requirements for school shows and assemblies; and definitely no more maternal guilt.

And about freedom from maternal martyr syndrome, which she highlights in her response to a ubiquitous, insipid, not to mention non-inclusive, Facebook post making the rounds during the time she was writing the book. Here’s the post and the beginning of her commentary:

To all the UNSELFISH MOMS out there who traded sleep for dark circles, salon haircuts for ponytails, long showers for quick showers, late nights for early mornings, designer bags for diaper bags & WOULDN’T CHANGE A THING. Lets [sic] see how many Moms can actually post this. Moms who DON’T CARE about what they gave up and instead LOVE what they got in return! Post this if you LOVE your LIFE as a mom ♥

Barf bags disposed of? Good. Where do we begin? It’s absurd, clearly. And could be dismissed on grounds of breathtaking inanity. Nevertheless, in its clumsy way, it highlights what is a commonly held belief: that good motherhood requires a denial of personal pleasure and a negation of the self.

If you are tired of hearing about the negation of the self being a prerequisite for motherly love, I recommend reading that section. I know from experience that one can be a parent and have a separate identity too. Given this culture of self-sacrifice around parenting, it’s just nice to have that affirmed once in a while.

Look, I know I shouldn’t be in the business of criticizing other parents who are trying their best. I know how hard it is to raise kids, the demands that pull at you from all corners. It’s just. Sometimes I want to be crabby about kids with bad manners. Ok?

And that is my very ranty post for today. 🙂 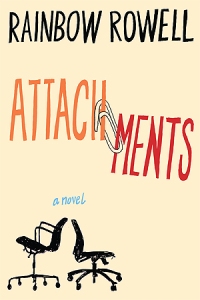 Sometimes you just need to settle in with some old friends. Last week I re-read Rainbow Rowell’s first novel Attachments. Set in 1999 during the Y2K craze (that took me back), Attachments centers on Lincoln O’Neill, a quiet guy who loved school – he has two master’s degrees – and has recently moved home to live with his mom while saving up some money and plotting his next move.

The highlight of his boring nights is reading flagged emails exchanged between two best friends, editor Jennifer Scribner (hah) and movie reviewer Beth Fremont. And he gets involved in their stories.

If you’ve never read a Rainbow Rowell book, I can tell you that she excels at dialogue and pop culture references. Because this is a book with a lot of emails in it and one of the writers is a movie reviewer, these two elements abound.

Also, I found Lincoln to be a really sympathetic character. He’s really kind of stuck in his life and doesn’t know what to do next. He doesn’t have anything that he’s particularly passionate about, other than school, and his network of family and friends is small. But there’s something really endearing about him. He plays Dungeons and Dragons with a group of friends and loves his mom and sister. He’s also really open-minded and congenial. I just enjoy spending time with a character who’s kind of a quiet introvert.

In the end Lincoln takes slow steps to get his life up and running again and he falls in love. I won’t give away how that happens except to say that I found it somewhat unrealistic, but Rowell wraps everything up neatly and the love story is very sweet without being too sappy.