`Tis the season when I give everything the brush-off in favor of gardening and outdoor activities. If you live in a Northern state or, you know, the Northern Hemisphere, I assume you understand why. Total desperation.

Special thanks to Mother Nature for giving us a real spring here in Northern Indiana. I’ve got all kinds of plant babies cookin’.

> Geranium phaeum ‘Raven’–a real stunner in the shade garden
> Rhododendron maximum: (Great laurel aka azaleas, as they’re generally referred to around here)
> Proof you can grow seeds in anything–those are plastic berry containers and they’re growing in the guest room under lights.
> Matteuccia struthiopteris (Ostrich fern)–another shade garden special. I planted it last year and it was just getting going when the cold hit. Looking forward to seeing how big it gets this year.

And there is lots of porch sitting to be done.

We’ve gotten an awesome dog trainer and that nervous little muffin is getting schooled on proper behavior–not biting small children being one of the objectives.

And our crew is playing Dungeons and Dragons nearly weekly now. I feel like a qualified nerd now that I’ve played, even though I don’t understand half of what’s happening and why. If you follow me on Goodreads, you’re about to see Dungeons and Dragons for Dummies added to my current reads.

But my Jacob, our DM (that’s Dungeon Master for the unschooled), is awfully patient and helpful. He’s amazing at running our campaigns, writing fun adventures each week. He even does special voices for the characters we encounter.

In other news, my mom and I hit Chicago last week and it was so fun to get out into a big city and pal around. We went to the Art Institute first, always a joy. Then we walked around downtown, hit some shops, mourned the loss of Fields, stared at the river for awhile, and wound up at Navy Pier. That place was hoppin’. Did you know you can walk around with frozen margs there now??? Saving this info. for future trips.

That’s the life update for now because BOOKS.

What Shannon read in April/May:

Women Who Run with Wolves: A feminist new-classic. Meaning, it was written in the 90s so it’s somewhat contemporary, but it has a very Second Wave feel.

I recommend it for any woman looking to *eyeroll* step into her power. I’m rolling my eyes because that’s become a bit of a meaningless catch-phrase. But let me just say that if you know you have innate power but are having trouble accessing it, or are feeling powerless, it may help to read this book because it is about the natural power of being woman-identified in our world.

The House of Mirth and The Old Maid: MOAR Edith Wharton! I can’t get enough of her ever, so I’m now rereading the major novels and finally dipping into more of the novellas. The Old Maid is one such novella. I loved it.

Elizabeth and Her German Garden: Read this for the first time last year and it is now one of my favorite books of all time. I can see myself rereading it each spring. I got myself a very pretty Penguin version as a gift.

I have loved every book I’ve read in the past two months. If I had to pick a few favorites, other than the rereads, which are always favorites, I’d have to list every book.

I leave you now with a glimpse of my fussy spring mantel-scape, including my two Mother’s Day cards made by Jacob and Desiree’ (peep my hand in the mirror, haha).

Thanks for stopping by!

Welp, I upped my game and managed three-ish reviews this month and none of them were books I actually read in June. A slow start, but here we are.

Happy 4th to the Americans and happy weekend to everyone else! I’m not particularly proud of my country at the moment, but I’m doing my best on my own anti-racist journey and hoping to encourage others to embark on the same.

In that vein, I’m reading My Time Among the Whites: Notes from an Unfinished Education by Jennine Capo Crucet. Her first essay is quite moving and I’d recommend it for anyone interested in how a first-generation, minority college student might experience their first semester on a majority-white college campus.

On to the June books!

What Shannon read in June:

–After the Flood: SO good. Will review it shortly.

-Two rereads: It Was Me All Along because I’m a sucker for a weight loss/eating disorder memoir; and Somewhere Towards the End because I never want to stop reading Diana Athill’s thoughts on aging and life in general.

-Can’t say enough about Nothing Good Can Come from This. Another book that made me feel seen.

The Obstacle is the Way: What a load of schlock.

What Ben read in June:

The Genealogy of Morals: It was good to come back and revisit this. I hadn’t read much Nietzsche since college days.

Legend: Another reread, this is the book that got me started on the delightful fantasy of David Gemmell. Mostly a pretty light action/adventure, it does also dabble in philosophizing about life in the shadow of death.

The Rap Yearbook: This was a fun read, and denser than you might expect from looking at it. The author has a rather frenetic, wisecracking style which complements his enthusiasm for the topic. He chooses the rap song that he deems most important for each year. Not necessarily “best” or “his favorite” but the one that mattered most in the history of the genre, and supports his choice with an essay, supplemented with charts, graphs, and illustrations.He often allows critics a little sidebar to make their case for an alternate pick. It was fun to get an inside perspective on genre trends that I had observed casually without really unpacking and dissecting the way a true aficionado like Serrano would.

Here is a shameless garden update because I can’t stop myself. It’s my new obsession.

My lovely mother came over last weekend and helped me dig out the rest of the rockery area. Seriously, she is amazing and I am so grateful. It would’ve taken me three days to do the work we did together in a couple of hours.

The dirt we dug up waiting under a tarp (to prevent washing over the yard in the rain) waiting to be hauled away:

It doesn’t look like much under that tarp, but…it is.

Was, rather. Filthy Hands Property Preservation came over yesterday and hauled it away for us. Took two guys around 45 mins. to shovel it into their truck.

You have to pay to get rid of dirt. Not a thing I anticipated when I started gardening. I do not understand the world sometimes.

Rocks laid out and representative of Neighborhood Squirrel Watch on back porch:

All the rocks and bricks were given to me by neighbors and this week I received enough to finish the job. More shameless updates to come.

In the meantime, here are Steven Q. Squirrel and his lady friend availing themselves of the birdseed I threw in the yard for them. Because of my habit of throwing seed off the porch to them, some of it has landed in the mulch bed and germinated. So we are growing an accidental millet crop.

Happy reading and, if you garden, happy gardening!

This is a new type of post I thought up after seeing some other bloggers something similar. I thought it’d be fun to share, generally, what I’m into on a week-by-week basis and, if you’re so inclined, I’d love to hear what you’re into lately too! Please do comment even if you feel like what you’re into isn’t that exciting. I’m always getting ideas from fellow bloggers and readers, so I’m happy to hear whatever you have to say. 🙂

Beverly Hills 90210 on Hulu and freaking loving every moment and amazing 90s outfit.

We all know I’m in a bit of a slump reading-wise, so I have little to say here, except that I’m slowly working through a (please don’t laugh too hard) James Van Praagh book called Unfinished Business. I mean, what if reincarnation is real?! I need to stay informed. 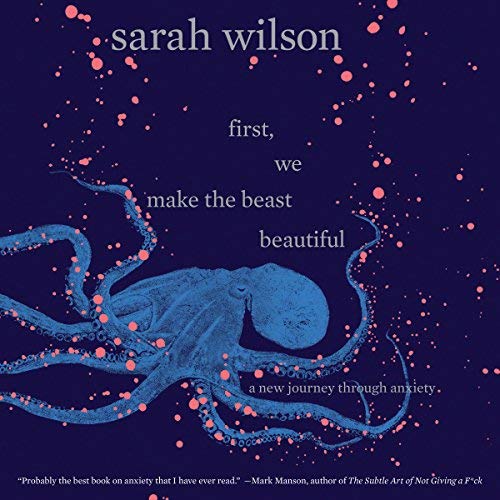 What I’m Listening to:

Also listening to the audiobook version of Sarah Wilson’s First We Make the Beast Beautiful and loving it. I recommend it for anyone who’s dealt with anxiety, depression, OCD, or, honestly, any other confounding mental disorder. 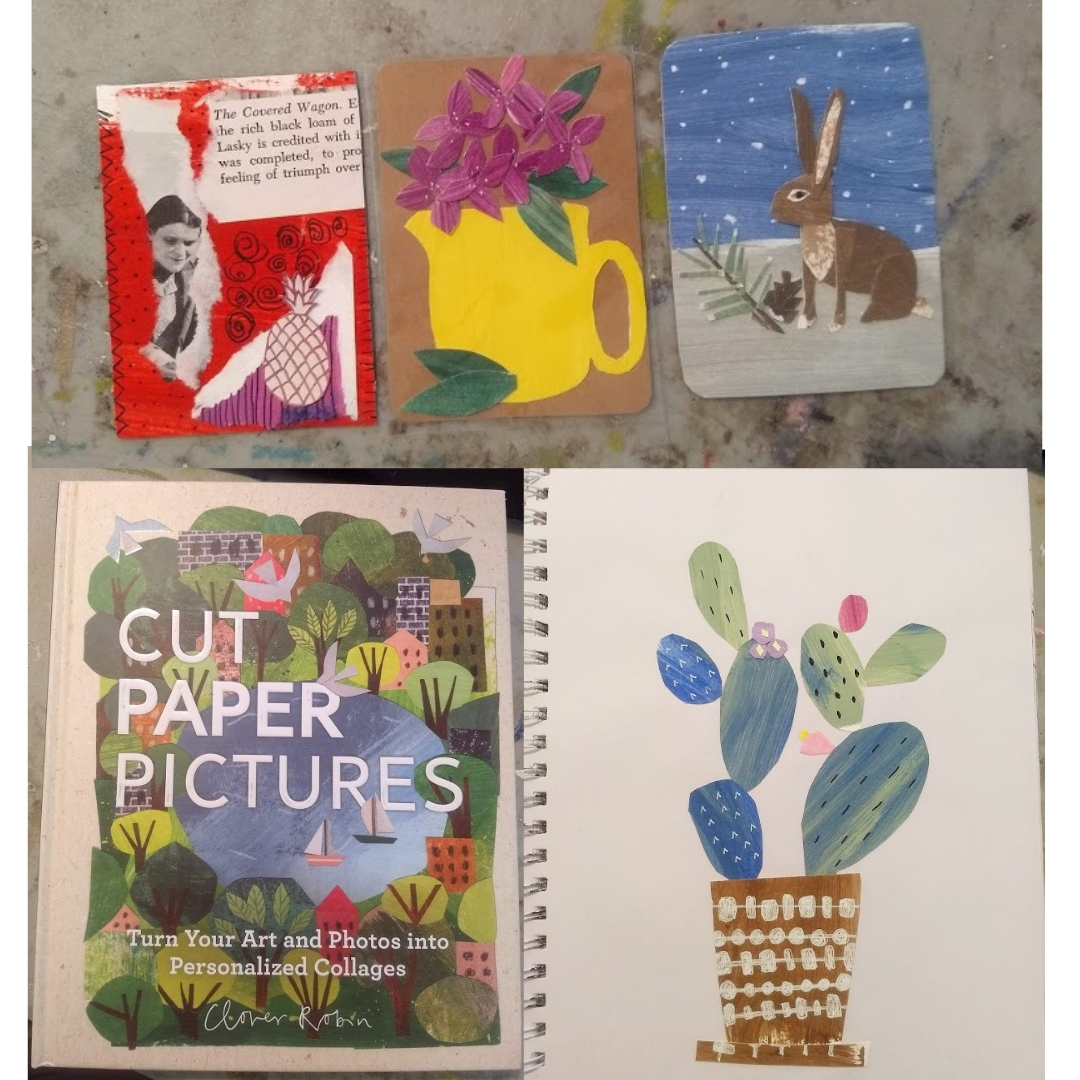 Collage everything. I discovered artist Clover Robin last year and ordered her wonderful book Cut Paper Pictures. I’m messing around copying her style to learn how everything is done.

How about you? What are you into/up to?